Scroll down to see the top not-for-profit colleges and universities in Washington offering online degree programs. 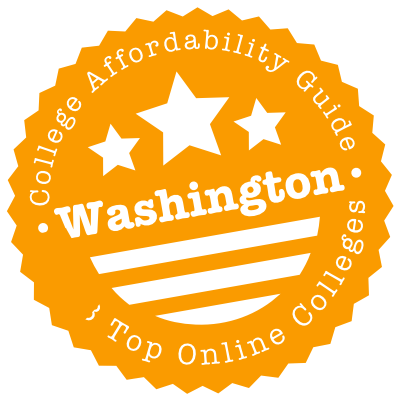 Want to see the most affordable colleges in Washington? View them here

Also on this page:

Liberty University
Featured Program: Choose from a wide variety of programs at the Associate, Bachelor’s, Master’s, and Doctoral level, most of which are 100% online.
Request Info

Tell us what you're looking for and we'll get you started!

On the lookout for an online degree from the Evergreen State? It can be tough to know where to start. You have to familiarize yourself with all the state’s degree and course offerings and then hope they’re affordable and reputable. So we’ve done the legwork for you! We’ve boiled down the most essential information about online workforce training, specific schools’ financial aid packages, and accreditation. When you’re done, we’ve given links to websites for further reading.

Washington State University offers nine bachelor's degrees and eleven Master's degrees entirely online. The bachelor's degrees are in accounting, hospitality business management, management, management information systems, criminal justice, human development, humanities, social sciences, and psychology. The Master's degrees are in criminal justice, special education, strategic communication, executive M.B.A., M.B.A., engineering & technology management, agriculture, agriculture - food and science management, agriculture - plant health management, electric power engineering, and molecular biosciences. A variety of financial aid is available for online students as well as on-campus students. Online courses are ideal for students who have busy schedules as the coursework can be completed whenever it is convenient, but some courses may require proctored exams. Online students can take classes in full-length semesters that begin in January and August as well as summer sessions beginning May or June. Online students can take advantage of many of the resources that on-campus students also enjoy.

Gonzaga University offers nine graduate degrees entirely online: an M.A. in Communication & Leadership Studies, an M.A. in Organizational Leadership, a Doctor of Nursing Practice - Post-Master's Pathway, a Doctor of Nursing Practice - Post-Baccalaureate Pathway, a Master of Science in Nursing, an R.N. to M.S.N., an M.A. in Sport & Athletic Administration, an M.A. in Theology & Leadership, and an M.E. in Transmission and Distribution Engineering. Online students have the option of taking courses in 16-week sessions beginning in January and August, 12-week sessions beginning in May, and 8-week sessions beginning in January, March, May, August, and October. Online students have access to student resources like the Foley Library, IT Help Desk, and the Career Center. Online courses are similar to on-campus courses in terms of content and difficulty level. There are several different forms of financial aid that online students can apply for such as grants, loans, and scholarships.

Students say the top reason they attend City University of Seattle is the flexible, convenient classes, and the university's online degree programs are designed to provide flexibility with an asynchronous format. Students also value the experienced instructors, and City U was in the top 30 Best Online Bachelor's programs on the 2015 rankings compiled by U.S. News and World Report. At the bachelor's levels, online programs are available in more than a dozen disciplines, from cyber security to health care administration. At the graduate level, City offers the only PMI-accredited master's program in project management in the Northwest that students can earn in a fully online format.

Shoreline Community College has more than 25 degrees and certificates online. Programs offered over the internet mirror the most popular pathways for Shoreline students, who primarily want to transfer to a four-year school or to get technical and job training. For students seeking to transfer, Shoreline has an Associate in Arts with eight majors online, plus a transfer business degree. These are all direct transfer programs that allow students to transfer with junior status. Professional and technical programs range from short-term (fewer than 20 credits) certificates to full associate degrees in fields such as business technology and supply chain management. Shoreline uses the Quality Matters review process to assure the quality of online class content.

The University of Washington Seattle offers a number of online and hybrid degrees and certificate programs through its School of Professional & Continuing Education. There are two online bachelor's degrees offered - a Bachelor of Arts in Early Childhood & Family Studies and a Bachelor of Arts in Integrated Social Sciences. Both are degree completion programs. There are 17 online master's programs offered and 13 of these degrees can be pursued entirely online. The rest are hybrid programs that require occasional on-campus meetings in addition to online classes. The university has 65 certificate programs, 55 of which can be earned completely online. Canvas is the learning management system used by the university to facilitate online instruction and communication.

Seattle College's four campuses offer a range of online courses through the joint Seattle eLearning collaboration. With more than 200 courses from the north campus offered online, students can earn an Associate in Arts degree through online classes. The Associate of Arts program is a Direct Transfer Agreement degree, and most colleges in the state will accept all 90 credits when students transfer from Seattle College. North Seattle College is one of the leading community colleges in preparing students to transfer to the University of Washington. North Seattle also has a few bachelor's programs and one, the Bachelor of Applied Science in International Business, has an online option.

Western Washington University offers two degree-completion programs online. The programs are primarily designed for students in underserved areas of the state, such as the Kitsap and Olympic peninsulas. The degrees offered through the distance learning program are the Bachelor of Arts in Human Services and the Bachelor of Arts in Multidisciplinary Studies. The programs are open to Washington State residents who have already completed an associate degree or equivalent coursework, as these programs only deliver upper-division coursework. Applicants to the human services program should have a GPA of 2.75 or higher. Coursework for the human services degree is presented in six consecutive quarters spanning the fall, winter and spring quarters each year. Students in this program must complete three internships at field sites where they will be directly supervised. The multidisciplinary program allows students to customize a plan of study in the liberal arts that meets their academic interests and skills. Students can start this program in any quarter. Students can also earn a certificate in teaching English to speakers of other languages (TESOL) through 100 percent online coursework.

Online Degrees in Washington: What to Know

Washington doesn’t publish a comprehensive list of all the online programs available to its students. However, if you’re going to school to become qualified for a specific job, the state has an excellent resource for you to use in your search. It’s called Career Bridge, and it includes plenty of online programs. The site has a sortable list of all training programs that “meet minimum performance standards for employment, earnings and completion rates.” You can limit your search to online programs with the click of a button.

If you’re unemployed, you may even be able to get free training through WorkSource, a state initiative to guide Washingtonians to in-demand jobs. One of the ways it does this is by running the Worker Retraining Program through community colleges. See if you qualify for free training at Start Next Quarter. Or find a WorkSource office and set up an appointment to discuss online training opportunities specifically.

Through the Running Start program, high school upperclassmen have access to the entire catalog of all the state’s technical colleges and several of its four year universities. That includes online courses. Juniors and seniors can take up to 15 credits tuition-free, though they’ll have to pay fees for the college credits they seek. Low-income? You can seek a fee waiver. Learn more about this and other aspects of the program on its FAQ page.

3. Get Prior Learning Credits to Speed up Your Degree

Many online students are looking for a fast, flexible way to get a degree and advance their career. There’s no faster way than by accruing college credit for skills you already have. Every schools in the state uses some sort of prior learning assessment — be it through a standardized test (e.g., CLEP or DANTES), a portfolio or other means. In fact, the state legislature tasks the Washington Student Achievement Council (WSAC) with increasing the number of students who receive prior learning credits.

Of course, you can also transfer in credits earned at other schools. The Direct Transfer Agreement (DTA) associate degree is the easiest way to convert community and technical college coursework to a baccalaureate program, and the Washington 45 succinctly lists associate-level courses that transfer.

4. Explore Online Colleges in the West

Washington participates in the Western Interstate Commission for Higher Education (WICHE), which allows students to pay reduced tuition to attend an out-of-state school. For undergrads, it’s capped at 150% of in-state tuition. For graduates, you’ll pay the same rate as residents. What’s that mean for online students? Not much for students going to colleges where residents and nonresidents enrolled in online programs pay the same rates. But not every school does it that way, and students taking a mixture of traditional and online courses will surely benefit from lower tuition.

If you live in the West but outside of Washington and want to study in the virtual Northwest, WICHE is also the way to go, as seven WA public colleges and universities are members (though only five offer reduced tuition to nonresidents).

Students increasingly view the terms “online” and “flexible” as synonymous. But how about affordable? The following colleges meet our tough criteria for affordability and quality. To compare these schools with other colleges in the state, visit College Scorecard.

Accreditation. You’ve heard the word, but what does it mean? It essentially conveys that other educators have reviewed a school and judged it to meet minimum standards of quality. Accreditation is important because the federal government only distributes financial aid to students at accredited colleges and universities. Here are the basic players:

Below are colleges that have to clean up their operations or potentially switch accreditors. In many cases, the infractions are minor and technical, but in others they’re serious enough to threaten the school’s existence.

Liberty University
Featured Program: Choose from a wide variety of programs at the Associate, Bachelor’s, Master’s, and Doctoral level, most of which are 100% online.
Request Info